The Justice of Intimidation 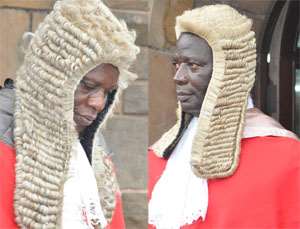 Justice William Atuguba, the Presiding Judge of the 2012 presidential election case, is not only clearly biased but he is also openly hostile to the petitioners. That is the opinion I walked away with after observing the court proceedings of June 11 and June 12.

I was particularly shocked and angered by Justice Atuguba's open court tirade directed at Phillip Addison, lead counsel for the petitioners, after the latter appropriately rejected the Court's apparent suggestion that the electoral commissioner (EC) be allowed to maintain overnight custody of a copy of Addison's voters' register, for purposes of crosschecking.

I saw nothing wrong with Addison's rejection of the 'deal,' and I thought the Court's suggestion was unreasonable and traversed contemporary (and even ancient) litigation practice. I also thought it was entirely appropriate for Addison to state the obvious that he could not trust his exhibit to an EC, whose integrity, independence, competence and candor were on trial. In my opinion, it was the Court's unusual and unfortunate request that triggered Addison's candid response.

I further found nothing unethical or improper about Addison, in response to a statement by Justice Baffoe Bonnie, pointing out that his adversaries had imputed criminality to his side without any retort from the Court and he, therefore, found it puzzling that his statement about mistrust should attract heightened scrutiny.

It was this ordinary exchange between Addison and Justice Baffoe Bonnie that provided the opening that Justice Atuguba had probably been waiting for to launch a needless, long-winded, partisan and public attack on Addison, culminating in his warning that 'the court would not hesitate in applying sanctions to Addison in accordance with the ethics of the court if he continued casting insinuations at the judges.'

Second, the Court's records will clearly show that criminality has been imputed to Addison's side, with no reaction from the court. He is entitled to remind the Court of that imputation where his, otherwise harmless, remark about not trusting his exhibits to the EC seems to trigger concerns about court room camaraderie. Put succinctly, the Court cannot allow Addison's adversaries 'to fight freestyle, while requiring him to follow Marquess of Queensberry rules.'

Third, I made several disturbing observations in the two days that I visited the court. In particular, I was astonished by the extent to which the court allowed the EC to evade simple questions, delay proceedings by providing long-winded non-responses and to provide palpably contradictory testimony. Is there a reason why the Presiding Judge has failed to remind the EC that perjury is a crime? Does the Court's sanctioning powers reach dishonest witnesses?

Another frightening observation that I made was the tendency for Justice Atuguba to pronounce that the EC has answered a question, when no neutral observer (or an observer who understands the question) will reach that conclusion. Why has the Presiding Judge failed to direct the EC, who after all represents a taxpayer-funded entity charged with running elections, to provide direct and candid response to very simple questions? Why has the Presiding Judge not insisted that the EC provides any and all public election record that can help the Court arrive at the truth, instead of the piecemeal overnight crosschecking of voters' register in the possession of the Commission?

Perhaps, this is all part of Justice Atuguba's announced doctrine of 'protecting the witness.' It remains unclear to me why the supposedly independent EC, who claims to have organized free and fair elections, will require any protection in the witness box. Why does the Presiding Judge countenance the flurry of trivial objections from the EC's counsel aimed at masking the truth? Perhaps, the Presiding Judge needs to be reminded that the EC is not an ordinary witness. He organized the contested election. The EC does not need protection from Justice Atuguba, contrary to the Justice's open court declaration. He needs to answer very simple questions about why the elections were characterized by massive irregularities, malpractices, omissions and statutory violations. And he needs to answer the questions seriously, truthfully and thoroughly.

A Presiding Judge of the Supreme Court must not only be fair to the parties, he must also be seen to be fair to all parties. In two days, I have, in my opinion, seen a Presiding Judge who is not only unfair but seems to be openly hostile to one party in the dispute.

The danger of this development is not that the honorable Justice can seek me out and cite me for contempt, although he might try. The real danger is that the Presiding Judge runs the risk of bringing his court to disrepute and losing his fellow Justices, if that has not already happened!

Clarifying The Law On Dual Citizenship To Expose T...
Justice of Contempt